Information on the COVID-19 Protection Framework in the building and construction sector. Read more 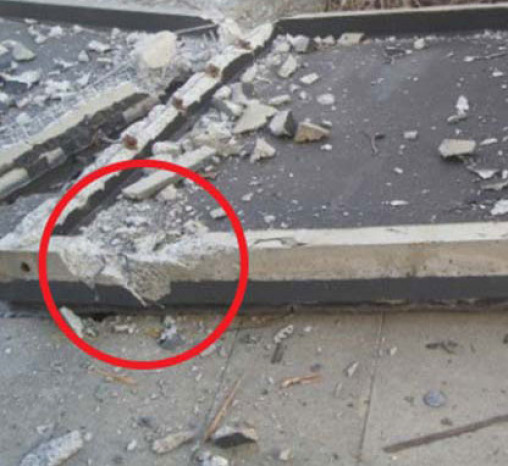 To alert building professionals to the need for careful design and construction monitoring of secondary structural elements to prevent poor performance in earthquakes.

This defintion aligns with definitions in The Seismic assessment of existing buildings which categorises elements into primary, secondary, or non-structural. (refer to Practice Advisory 19).

Make secondary structural element design and construction monitoring the responsibility of an engineer with suitable competency and qualifications in structural engineering, such as a Chartered Professional Engineer (CPEng), who is appropriately experienced in the application of earthquake actions.

The damaging earthquakes in Canterbury (2010/2011) and Wellington (2013) have highlighted many cases of poor performance of secondary structural elements, particularly in multi-storey buildings.

The collapse of stairs in several buildings were of particular concern. Refer to Practice Advisory 13 for more guidance on specific checks that should be performed on egress stairs.

The failure of secondary elements during earthquakes can be a life-safety hazard and their failure can result in significant disruption and economic loss. Attention to structural engineering design is required to ensure that these elements meet the provisions of the Building Code.

The Building Code Clause B1 Structure requires all building elements to have a low probability of failure when exposed to the physical conditions likely to be experienced within their lifetime.

A building element is any structural or non-structural component, or assembly incorporated into, or associated with the operation of a building. Secondary structural elements are therefore required to accommodate earthquake actions.

All secondary structural elements and their connections therefore need to be designed to resist the earthquake demand including differential movements of their attachment points. The specific design document for complying with the structural performance requirements of the New Zealand Building Code is Verification Method B1/VM1, which references NZS 1170.5 Earthquake actions for New Zealand. Section 8 of NZS 1170.5 contains a design procedure to determine the demand for secondary structural elements in accordance with the risk level, the properties of the part and the type of building.

For the design of specific elements and their connections to resist earthquake actions, Verification Method B1/VM1 references the following Standards:

Secondary structural elements and their connections, both individually and as a part of a system, must also meet the applicable durability requirements of Building Code Clause B2 according to location and use. In many cases, this will be a minimum of 50 years. Some parts of systems such as glazing and gaskets of curtain wall glazing systems will have a less onerous requirement.

Each secondary structural element and its connections need to be carefully detailed for the earthquake actions they will be subjected to. These actions will include gravity load, earthquake inertial and interstorey displacements imposed by the primary lateral load resisting system. Alternatively the elements may be separated from these displacements.

Secondary structural elements and their connections should have robust details and have clear and simple load paths, that are easily verified, from the element through the connections into the primary structure. Load paths should account for over-strength actions as appropriate and should accommodate actions associated with an earthquake larger than an ultimate limit state design event. Back up alternative load paths with ductile detailing can also provide a measure of resilience.

Non-load bearing walls will need to be designed to resist their own inertial forces and the differential movements of their attachment points. The member and the connections may be designed to respond elastically or in a ductile manner. A common detail in framed buildings is to design the wall to be fixed at the base and restrained at the top against out-of-plane movement but to allow in-plane movement at the top and sides to accommodate interstorey displacements. Secondary elements such as stairs that span between floors need adequate seating at the maximum possible inter-storey displacements between the relevant levels. Clearances and seatings for stairs should be capable of sustaining at least twice the Ultimate Limit State (ULS) inter-storey displacements as calculated in accordance with NZS 1170.5, after allowance for construction tolerances.

Stairs need to be designed for lateral as well as longitudinal earthquake actions. Therefore inertial earthquake actions need to be considered in both principal directions. It is recommended that stairs should be restrained at the top level. The lower level should be detailed to provide vertical support, with minimal lateral restraint, and accommodate twice the calculated ULS interstorey drifts in both principal directions. An example that will provide this degree of movement allowance is shown in Figure 3.

This will take into account tolerances and the anticipated variability and uncertainty of calculated building displacements including an allowance for earthquake shaking larger than the ULS event. Designers should allow for minimum and maximum coefficients of friction in the design of stair connections. Note that yielding of the tension reinforcing at the fixed (upper) stair level will add to the transverse movement at the sliding end of the stairs.

Gap and ledge details should be avoided because they are restrictive and prone to filling up with debris. If movement allowance is provided by a gap and ledge detail, the gap should be detailed to prevent inadvertent filling of the gap. One way to achieve this is to provide cover plates that allow movement but prevent debris filling the gap. In all cases the separation details between elements should be identified on the design drawings with notes to highlight the specific clearances that need to be confirmed as part of the construction monitoring process. Practice Advisory 13 contains more advice with regard to checking egress stairs in existing buildings.

Precast cladding panels must be designed for in-plane and out-of-plane actions. Care is required to ensure there is sufficient allowance for movement. Particular attention is required where panels meet at corners and may be subject to dual actions. This is illustrated in Figure 4. A level of resilience can be provided by designing the connections with adequate ductility in the event that clearances are exceeded. Where precast panels are supported at more than one level in buildings they need to be designed to sustain the actions resulting from the inter-storey deformations that will occur. See SESOC Interim Design Guidance (Reference 12) for further advice. 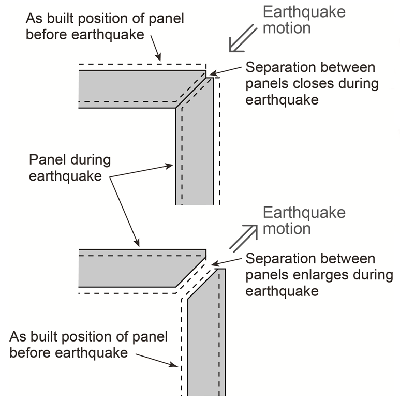 Another area where there is a need for careful detailing of secondary structural elements is where there are significant differences in inter-storey drift between adjacent floors. For example considerable difference in drift may occur in a building where fenestration requirements for a particular storey require a change in the primary structural system.

Ensure all secondary structural elements and their connections comply with the Building Code.

On-site construction monitoring is crucial to verify that design details are built as intended. Particular attention should be applied to critical design information, such as fixing/anchorage details and seismic clearances, eg, clearances between non-load bearing panels and building columns.

Check that the design details have been built in accordance with the consented documents before issuing the Code Compliance Certificate.

Seismic gap details should be inspected periodically to ensure that the gaps have not been partially or fully filled during construction or as a result of poor maintenance. This is especially important with egress stairs because obstructing the seismic gap may restrict or prevent movement resulting in failure of the stairs and the loss of an escape route from the building.